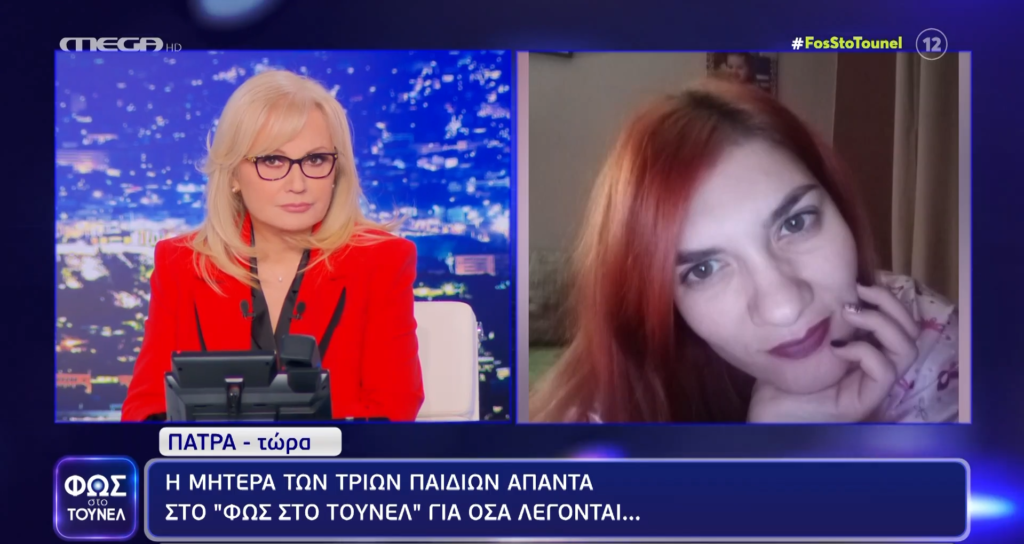 The deep search of "Tunnel" in the hospitals of Patras for the thriller with the three little sisters, caused the intervention of their mother live in the show.
Share

In this investigation, the “Tunnel” also located a witness, who was with her sick child in the next room with that of the unfortunate Georgina.

The two rooms were connected by a shared bathroom. When the woman opened the door, she saw at that moment the mother of the 9-year-old reacting with panic, saying that her child was opposed.

Then, according to what doctors said in the “Tunnel”, she walked out, knocked on the door of their office and asked them to follow her to the ward, because something strange was happening.

The screams of the nurse who had preceded and found the child dead, woke up the doctors who rushed to help her. After much effort, they brought it back to life.

Everything the mother said in the “Tunnel”…

The mother did not agree with what was heard from the main medical staff and wanted to “put things in their place”. For every question, even of the experts who were on the set of the show, there was an answer.

He claimed that during the crisis the little girl was awake next to the child and talking on the phone, while when she realized the problem, she notified the doctors.

“I was awake, I was talking on the phone, and during the interrogation a witness will come and they will see the calls, I say that something is wrong and I hang up the phone. “And at that moment, Georgina was thrown and fell back, as Malena did,” she noted.

“Doctors were constantly coming and the little one was permanently in the machine. “She was depressed,” said the witness who found the “Tunnel” and her child was being treated in the next room with the undefeated Georgina. The moment she opened the door to go to the canteen, it was the time when the unfortunate 9-year-old was opposed and the witness describes what unfolded before her eyes:

“Her mother shouted at me that she was stopped and ran to pick up the bell to warn. He told me “sit inside, do not see your child” and that is what I did. It was very painful. ”

Earlier, he said, he heard no noise or noise, except for the oxygen machine in Georgina’s room.

The witness emphasizes that her mother had confessed that she is divorced and that she has already “lost” two children.

“I did not hear voices in the room before…”

Responding to Angeliki Nikolouli, the witness stood in detail at the scene she saw when she opened the door.

“When I dressed my son and we opened the door to go to the canteen, at that moment the little girl’s mother was running and pressing the button. He pressed it for a long time, he was in a panic and he tells me “the little one was stopped”. And so as we were dressed, we went in again. But I did not hear her before she shouted to understand that something was happening. “After I closed the door, nurses and doctors ran quickly.”

The morning of Wednesday, April 7, 2021 at the Karamandaneio Pediatric Hospital of Patras, the 9-year-old girl arrives. A member of the medical staff describes:

“She was brought by her mother who told us that the little one was shaking in her sleep, she reported convulsions at night during sleep. The 9-year-old immediately underwent an encephalogram, a magnetic resonance imaging while she was taken over by a cardiologist who knew her history and had examined her again a week earlier, without diagnosing anything serious. We fell on her. It had not been more than two months since they lost their second child, it was very fresh and that’s why we were a little more sensitive and we ran a lot. We did everything in two days, what would normally be done in a week. “Everything looked great and her condition was not a cause for concern.”

What happened at the hospital on the fateful day…

On Sunday, April 11, the mother was the one who would experience moments that everyone avoids again. Having already mourned two children and pregnant in the fourth, she would see her eldest daughter go to the other world and return heavily taken… The testimonies are shocking:

“The doctor passed around six and the child was sleeping normally. Seven instead of five mom comes to us. We are talking about short distances. Two rooms distance. He told us that something was wrong with the child. She did not give us the picture of the emergency, so we went out walking with her, although in the meantime a nurse had already gone to the room. The one who raised her voice was the nurse. He screamed “run” and we all ran together. The child was dead. We all fell on him. ”

“He literally fell on the child. In fact, when he heard which child it was, he shouted “I will not let you go”. “Everything was done and he brought it back.”

After a relevant question from a journalist of the show about whether valuable time was lost, the witness answered:

“Of course. That’s for sure, it’s a given. What can I tell you, this is very mysterious. It’s weird. If the heart is troubled, it will not return. This heart was fresh. She is back. ”

Advances in research and revelation on pulmonary edema…

As the investigation progresses, a number of critical questions have arisen that the authorities are called upon to find answers to.

Questions also arise regarding the death of the last daughter of the family, just 6 months old. According to the autopsy report, her death was due to sinus node agenesis. It is a rare condition that has to do with the degeneration of the cells that make up the so-called natural pacemaker of the heart. According to exclusive information of “Tunnel”, in this finding that the Authorities have at their disposal, the pulmonary edema is mentioned as the cause of death, which must be further investigated how it was caused. There has been a lot of talk about the blood clot that was found next to the unfortunate six-month-old girl. According to the information of the show, this was presented to the Forensic Medicine Service of Patras.

The revelation of the “Tunnel” for valuable items that were lost in the death of an infant also caused a sensation. No autopsy was performed at the site, the child was delayed in autopsy and the time of death was not identified!

Veterans: We organized a fight to help the little girl…

Two football veterans’ teams organized a charity match last October in order to raise money to meet some of the needs of 9-year-old Georgina.

“The role of the veterans is to help where they can. As far as we know, the little girl was stopped and left in a wheelchair. We organized this race to raise money for the family since they had expenses with the physiotherapy and what came out. We collected around three to four thousand euros “, said characteristically Dimitris Argyropoulos, President of Panachaiki veterans and organizer of the match.

He also referred to what is being said about the family and what may have really happened.

“I am not responsible for saying what happened, it is very heavy to say that someone wanted to harm the child. “Every man goes through his drama and his Golgotha ​​in a different way,” he concluded.