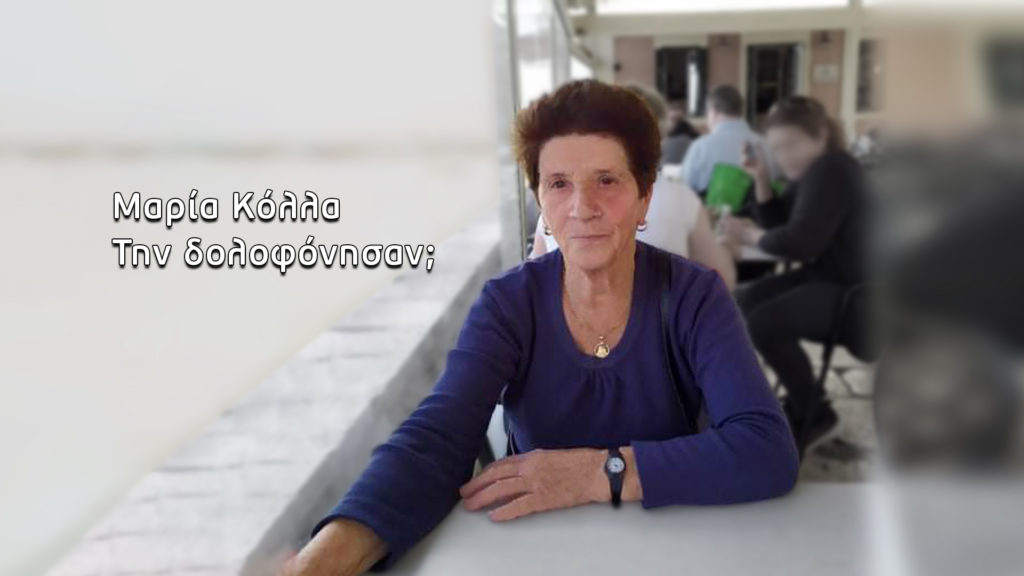 The new research of "Tunnel" on the island and the data that arrived on the show on Friday, January 28, one after the other, pave the way for the truth.
Share

Witnesses and friends of Maria Kolla, the mother of many children and grandmother who is missing, spoke about the disputed hours before erasing her traces.

The search on the live show revealed the people who last spoke to her, on Sunday, September 5, who is believed to have disappeared. Some responded to the “Tunnel” call and others did not…

The testimony that brought about the overthrow and will be investigated by the Authorities, was given by a resident of Corfu shortly before the show turned off its lights.

What does the woman who helped her say in “Tunnel”?

The woman who was close to the missing person, helped her with various jobs and served her mainly in the bank withdrawals she made, spoke to “Tunnel”.

In the first interview she had given, she had claimed that “she was killed for her money” and that she must have lent to someone.

“We became close, I had her as my mother. I helped her to get the money from the bank and all the work. I last saw her on Sunday afternoon, when we were arranging the program for the next day. I was worried because her phone was off, time was running out and I had no news of her. She had told me some phobias about a neighbor, that he was threatening her. She has been scared lately. “I do not think she is alive, the most likely scenario is that she was killed for money.”

The journalist of the show spoke to her again and this time she claimed that the missing person had no money and did not know if she had lent to someone she knew.

“She never told me she owed money to anyone. “I have no hope that she is alive, they have definitely killed her,” he concluded.

Their anxiety and despair are expressed on the camera of “Tunnel” by the daughter and the priest brother of the missing Maria Kolla. The family offers a reward of 5,000 euros to anyone who provides information that will lead to its location.

“We have remained the same,” says Angeliki Kolla, justifying the stagnation of the investigation in the fact that in the closed society of the village, the people who probably know, are afraid to speak.

Accepting that her mother is not alive, she resorts to financial incentives and appeals to anyone who knows anything to give an item.

For his part, the brother of the missing father, Nikolas Chytiris, describes their desperate efforts to find what is left of Maria.

“We have brought the dogs three times. We have done too many kilometers. In the gorges, in the hills, everywhere we may find something. But in vain. ”

What the priest asks on behalf of the whole family is to give them the opportunity to offer her the right to a dignified funeral.

“We are honestly in a tragic situation,” he says desperately.

“Whoever did it, let him go out and say it…”

A neighbor of the missing Corfu and her friend spoke to the camera of “Tunnel” about what happened that day.

“We never quarreled, he came to visit me every day. Sunday noon was the last time he came. “She was calm, we chatted normally and the woman was fine,” she described excitedly.

“She once told me that if I needed something, I should call her in the morning because she was afraid to go out at night. Whoever keeps his clothes has half of them, he told me. I’m still sitting and looking outside to see if it looks like it. It can not leave my mind. I’m afraid something bad has happened to her. “Whoever did it, let him speak and find it from God”, she concluded emotionally charged.

The traces of Maria Kolla disappeared in Kokkini, Corfu on Sunday, September 5, 2021 and there was a great mobilization by the Authorities to locate her, but without any result.