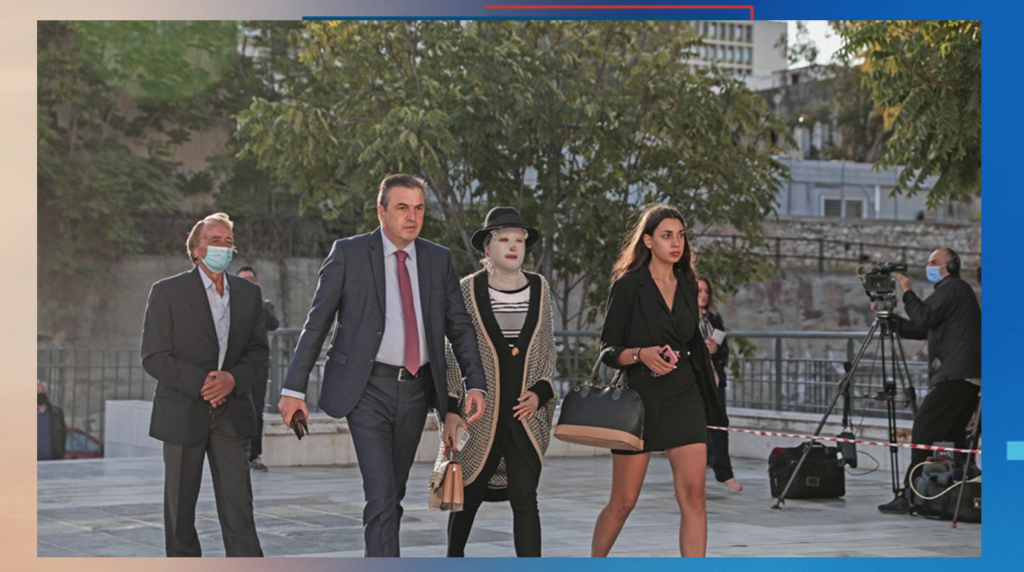 The trial for the case of the vitriol attack against Ioanna Paliospyrou in May 2020, before the Mixed Jury Court, continues with the examination of the remaining witnesses and the reading of documents.
Share

What Ioanna’s psychiatrist, Konstantinos Kontoangelos, mentions in his testimony, is shocking.

“I have met people without a hand, without a foot, but never a person without a face. I was shocked by the image, I saw a woman who has no hope, no dream, only her personal death. She was forced to turn her eyelids for three quarters of an hour, she felt pain and was in the mood to commit suicide. She was crying, she was not sleeping, she had lost fifteen kilos, she was curled up without speaking, I had to try to give her hope. She is undertaking treatment, antidepressants, anxiolytics. The feeling of suicide was because she would never get back to how she was, locked in the dark she only has her mother and her friends. Her brain has recorded the trauma as a damage that does not go away. Her clothes still smell like vitriol after so long.”

“I mainly manage Ioanna’s fear for after the release of the accused. She keeps asking me if she is in danger and I can not answer her. She is a woman of mental reserves and strength, not everyone can handle this. In her house there is a huge mirror that is covered because she does not want to look at herself. I have to give her a hope that she will be able to cope, that I will not lose her and I believe that we will succeed. She has a severe depressive disorder, with anxiety manifestations and intense stress. The memories do not allow Ioanna’s feeling to develop. There is improvement, the medication, the environment and the support of the people have helped.”

Annita Nathaniel is one of the people who stood by her from the first moment.

“I met Ioanna at the end of the year. I was shocked by the violence of the crime. I thought it could have happened to my daughters. She was a broken girl. It took us a while to approach her. She was skeptical. Hard to trust someone else. I was trying to stimulate her. She lives at home, she has no social life, I ask her to go for a walk outside at night, because during the day she should not move because of the sun. Contact with the doctors gives some hope, then new methods of rehabilitation come out, everyone tells us that she must be patient.”

“She has many times thought to put an end in her life. Her psychiatrist is doing an excellent job, we are trying to look to the future with optimism. Her psychology has plunged in the past days, the attitude of the accused has put fear back into her life. She wonders what will happen after all this. What keeps her alive are the messages of the people. What the mother of the girl from Folegandros said about her gave her courage. To become a symbol, to have a goal. I wish our society had more of Ioannas”, she concluded.

A close friend of the accused testified at the trial, who claimed that she did not know Ioanna, while she stressed that the perpetrator did not talk about her personal life.

“I do not know the victim. We were close friends with E ****. I did not know anything about the case. I have known E *** for 4-5 years. We were close friends. She was a closed character in many things. She did not talk much about her personal life. She was mainly telling us about work. She had not told me about her relationship with N ***. She was referring to a gentleman for a while, but did not say his name. About 2018-2019 referred to him. In May 2020 we had contacts, but they were not as regular as before. We went out once in May with a friend because she was not very good at work. We had seen her not at a very good mood, different from what she was,” the witness said characteristically.