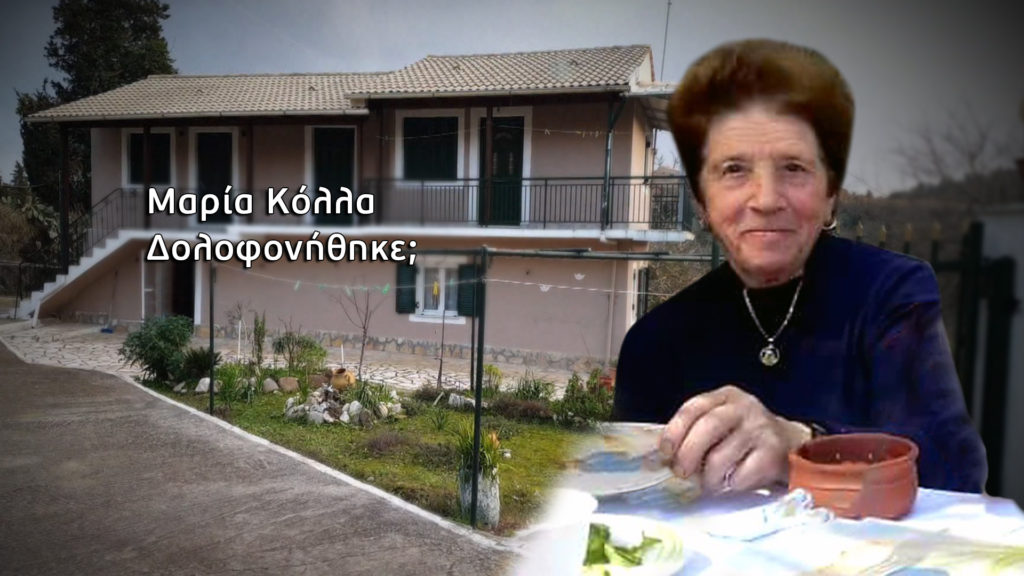 The "Tunnel" was found again in Corfu, on the island of mystery for new investigations in the case of the mother and grandmother with many children.
Share

The new testimony about Maria Colla that is ignored, “lit” fires. A friend of hers revealed on the show the sale of a property, which he climbed for money. The person who would sell it was close to the missing person and demanded immediate payment.

Kolla’s neighbor, who had allegedly threatened her in the past, also spoke on the show.

Before her disappearance on Sunday, September 5, someone left a letter at her house, telling her to be careful… The “Tunnel” located him and talked to him. At the time of her disappearance, he had told police that he had killed her, but then denied everything.

The testimony that lit “fires”…

The woman who spoke to “Tunnel” about the sale of the property, also knew details about Maria. She knew that she had borrowed a considerable amount of money and that this occupied her intensely.

“In order for Maria to give money, she must have been told that it was a great need. But he did not tell me or others who he had lent to and how much. He trusted a woman he had met recently. I told her to be careful but she did not hear anything about her. He had her as her daughter. “They even went to the bank together,” he tells “Tunnel”.

When asked by a journalist about the sale of the property, the witness answered:

“I had seen the estate to buy it. This person was asking for around 14 to 15 thousand. He prepared the papers, but he told us that he owed it to the State and he wanted me to pay around 7 to 7.5 thousand in advance to pay off, so he said. I do not know if this is true. I did not accept and left it. He insisted and said to me “give me the ones to pay off and then we will find them”. I refused, but I’m afraid that this money was given by Maria. I say this because before he disappeared, I saw this person and he told me that now the property is ready for sale. ”

A friend of the missing Corfu woman also knew about the loan.

“Oh Maria, what did they do to you? May God punish whoever did it. “She was such a good woman, she helped people and they ate her,” she says excitedly outside the front door of her house.

“He told me he had lent money, but not to whom. “I asked her to tell me who he was, if I knew him, if he was from the village, but he would tell me when he would return them to her,” says Maria’s friend.

“We have many suspicions, but nothing for sure. Let the one who did this thing pay for it, find it from God because this woman did not bother anyone. “Unbelievable, unbelievable,” she exclaims in shock.

Neighbor: I had never threatened her as they say…

From the night of September 5, when the traces of the woman disappeared in Kokkini where she lived, her fellow villagers feared that she had fallen victim to a criminal act.

The villagers claim that in the past there was a man who had threatened to kill her.

The “Tunnel” journalist located him and talked to him.

“The villagers bring all this out here. I never threatened her. “I avoided her and we had no contacts”, he says and categorically denies that they had real estate disputes.

She claims that she does not know anything about her disappearance, even if she had differences with others in the area.

“I did not interfere”, he says and emphasizes that “Maria must be found”.

Overthrow by the farmer who plowed her field…

The farmer who helped the missing Corfu by plowing her field, is one of the people who had a telephone conversation with her, a few hours before she disappeared.

“She wanted to get some oil for her sister-in-law. We did not talk about the fields. ”

The next day, Monday, September 6, without an appointment, as everyone believed, he went to her field and completed his work. He did not see Maria and asked a neighbor about it.

“He probably went to town to get paid,” she told him.

“In the afternoon, her brothers alerted me. “In the fields I dug, we dug even deeper with the tractor, a shovel came, nothing.”

The hopes that the missing person had in life are diminishing.

“After five months? And where should it be? ” he wondered excitedly.

“I left her a letter before she lost it…”

Another of Maria’s neighbors spoke to the show’s camera. He is the sender of the letter, which he left her one day before her traces disappeared. As he says it was the first time he wrote to her.

“I still miss him, he was my support. On Saturday at noon when she was away from home, I left her a letter because I felt she was my own person. I wrote to her “:

“” I know you have a hard time “” because he had told me that he had spent a lot of money somewhere. Thank you very much for everything, be careful. ”