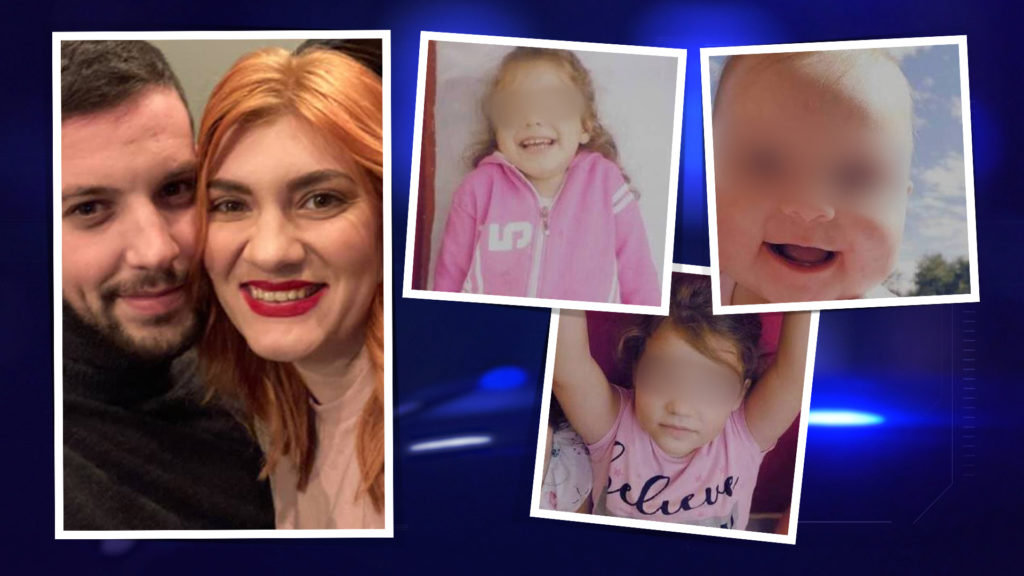 The case of Patras with the three dead siblings that has "frozen" the whole of Greece, seems to be on track to be solved.
Share

During the live show, on Friday, March 18, Angeliki Nikolouli was given a serious testimony. She was shocked to say that “one of the three children seems to be talking to investigators through his grave.”

According to the reliable information that reached the show, an important element that has been found during the thorough investigation, remains to be established in order to “tie” the case and to shine the truth.

The “Tunnel” also presented new testimonies with evidence that caused a sensation.

A witness from the Security Forces said that the mother of three children, a few months before she married her now estranged husband, had appeared to his relatives as dying of cancer.

According to the complaint, she was interested in the young member of the family who was involved in football, with whom she had a relationship. In fact, he told his parents to let him stay with her for the short time she had left in life.

The family showed sensitivity, since one of its members was facing the same health problem. When they realized from their investigation that Roula was lying to them, she was threatening to end her life.

Another testimony took the investigation to a medical facility, with the unfortunate Georgina bruised on her body and her mother blaming nurses for it.

The father of the children also spoke on the show about everything that is happening and being said lately. He confirmed the separation with his wife, something she had reported in the “Tunnel” and also referred to the deaths of his children.

The grandfather on the part of the children’s mother spoke in shock on the show about the tragedy that struck them.

“Easter is approaching and we are pulling a Golgotha, raising our own Cross and I think we should all be respected. I appeal to all those involved. Police Authorities, forensic authorities and those in charge. To finish it very quickly, to calm everyone down. If I could give my soul to stop the children from being sent away, the lost souls and to call my daughter a murderer, I would give her. I have no doubt about my child, no matter what they say… ”

She had completed the cycle “in the mind of a perpetrator”…

Efi Lambropoulou, Professor of Criminology at Panteion University, teaches at the applied criminology seminar, which was attended by the mother of the three unfortunate girls. Speaking to “Tunnel”, she said:

“Among other things, we have a distance learning program, which anyone can choose when to attend. As far as I know, the mother has completed the cycle, she has also submitted her homework, but I do not know if it has been graded yet. We analyze the social conditions of crime, the risks of victimization and prevention strategies. We mainly deal with such issues in this section or with issues related to the sociological analysis of crime and ways to prevent it. The title of the seminar is “In the mind of an perpetrator…” and this lady is one of the 1500 people who have attended it. ”

The mother from Patras had spoken to Angeliki Nikolouli about her interest in criminology and the course she had attended, however, as she mentioned, she had not had time to complete it with the problem presented by Georgina…

Grandmother: This does not happen to us…

Manos’s mother, unable to hold back her tears, spoke to “Tunnel” and stated the following:

“I can not, three children are gone. No this is not happening, not even for a joke, it has not crossed my mind for any reason. I’m interested in seeing what happens to children. Let’s find out what they left behind and end it all… ”

According to secure information from “Tunnel”, the next ten days will be decisive for the form that the investigation of the case will take.

The informal committee of medical examiners set up for the deaths of the three children will have the final conclusion ready. It seems that the scientists have already gathered the data they were looking for from the medical records of both Malena and Iris.

According to the information of the show, in two of the three cases they conclude that the deaths are not due to pre-existing diseases or genetic cause, but were caused by pathologically unexplained, lack of oxygen.