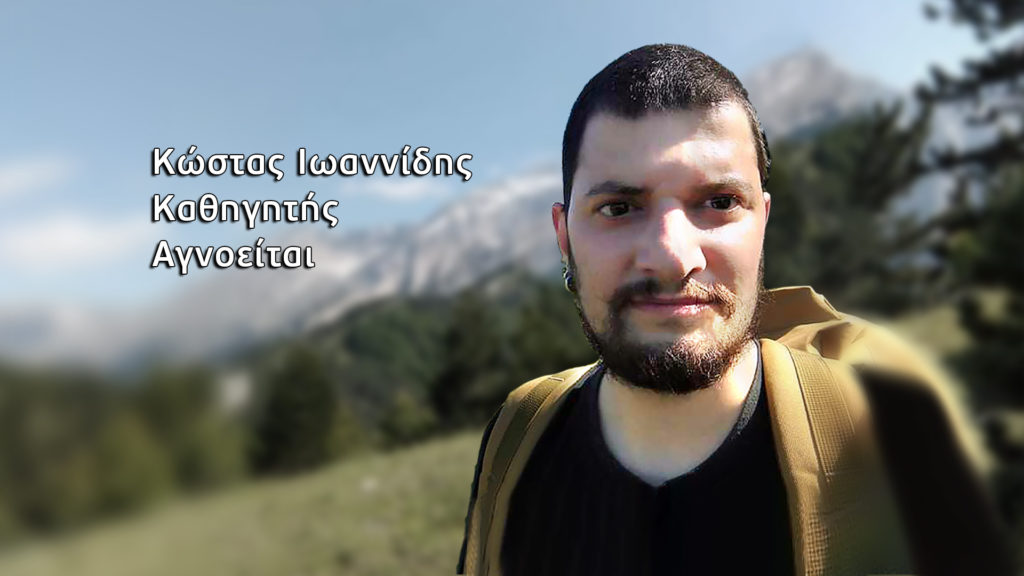 The disappearance of the professor on Olympus in early July is evolving into a riddle for strong solvers.
Share

The family of 36-year-old Costas Ioannidis from Pieria, talks about gold mining in the area and is afraid that his son was found at the wrong time, in the wrong place and disappeared.

The father of the missing German teacher, speaking on the show from Germany where he lives, referred to some incidents that impressed him.

“My wife found two cigarette ends in his belongings, but Kostas did not smoke, only electronic. We do not know if these have been checked by the police. We found his wallet stuck in his car. Lately we have seen some people moving strangely on the mountain and I am sure they were looking for money, as it is rumored that they are hidden in the area. I went alone to look for him up to a point, but my family would not let me go to the mountain. What we are asking for now is for a new investigation to be carried out in new places to find an edge on what really happened to him.”

Referring to the day he left him on the mountain, he said:

“He was not very talkative. I did not ask him what was bothering him, because he was a closed character. Many times I surprised him, I followed him and he was happy like a small child. We were very close as father and son. From the age of 10 I went to the Alps in Germany for mountaineering.”

Following the traces indicated by the athletes – witnesses…

After the first show of search for the German teacher, witnesses appeared – athletes, who that day, July 3, took part in the race for endurance, Olympus Mythical Trail, which was held on Olympus.

Lazaros Rigos, organizer of the sports events, became a reporter for “Tunnel” and followed at a high altitude the last traces of the professor suggested by the new witnesses.

From point zero, that is, where the backpack of the missing person was found, at an altitude of 1,720 meters, Mr. Rigos said:

“According to the testimonies given to me, no one saw him anywhere higher up here. They saw him gradually descending around 17:00 in the afternoon. Some of his personal belongings were found scattered in two or three places. It is very difficult for someone to have a fatal fall from where we are now. The crews hung from everywhere and flew drones to find something, but unfortunately no trace of him was found.”

What did the athletes who saw him in their course say…

“The missing Ioannidis was seen here for the last time”, stressed Mr. Rigos from another point of his journey.

“He probably came to admire the view. In no case could anything happen here, because there is no cliff below. Our athlete who met him, said that he was impressed that he did not greet him, as it is something that is common on the mountain between two hikers. From now on, no one has seen him again.”

He also referred to an incident that made a big impression on him.

“It seems very strange to me that he left behind his backpack and other personal items and took only his flashlight with him. Was he going somewhere? Did he know something? All possibilities, even that of deliberate disappearance, are open with the same weight on the scale,” he concluded.

“To continue the search to find our man…”

The wife of the missing professor, speaking to “Tunnel” from Germany where she has been living with her child for the last time, stressed:

“I used to go mountaineering with him, but because of the baby I could not accompany him. He knows the mountain well and was generally experienced, as he dealt with it from a very young age. I think he would do what we did every year together. We went with supplies and usually stayed three days on the mountain. We chose the route in advance. And this time, he had organized it for a long time and told us the route he would follow. We talked on the phone, he called me to let me know where he is and that everything was normal. He did not tell me anything unusual, other than that he had taken the wrong charger cable with him. After the disappearance and when I took his cell phone in my hands, I did not see anything suspicious or unusual.”

She emphasizes that her husband was not the man who wanted to leave and be away from his family. She also wanted to thank all those who took part in the investigation and helped in any way and appeals to keep looking, so that they can get an answer for their man.