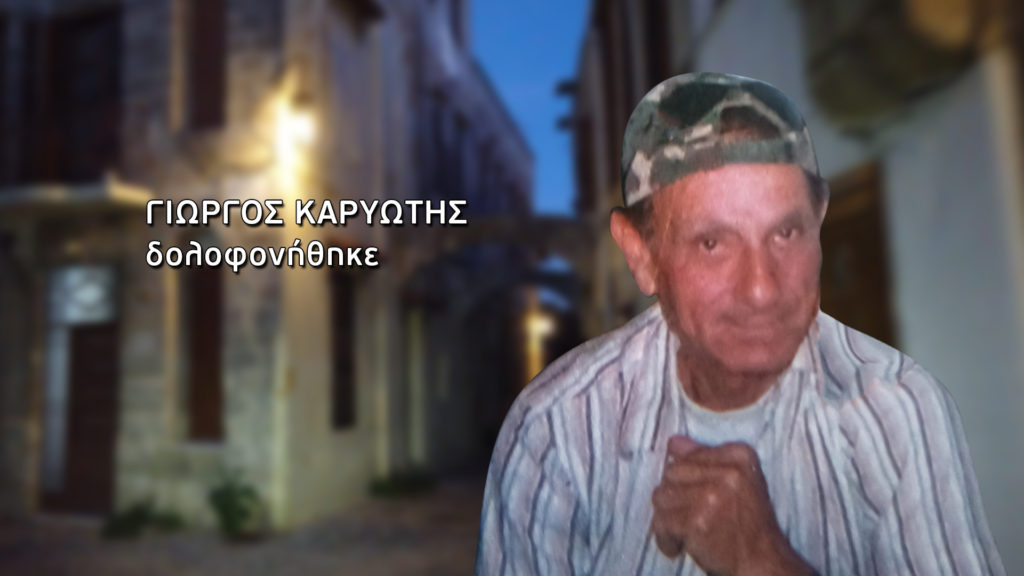 A breath before solving the murder of the unfortunate head of the family in the Medieval city of Rhodes and a serious incident comes to upset his family again.
Share

The eldest son of Giorgos Karyotis, who lives today in the killer’s house, was attacked by unknown assailants.

According to his brother, Vangelis, in the early hours of Sunday, December 11, two or three men tried to break into the house where their father was murdered at noon on Tuesday, June 14.

“They tried to do the same to my brother…”

Speaking to “Tunnel”, Vangelis expressed the certainty that this serious incident is related to the perpetrators of his father’s murder.

“Last Saturday towards Sunday morning around a quarter to three in the morning, my brother, who now lives at my father’s house, was attacked by kicking the door. Some were trying to break it to get inside. Good thing they didn’t, because we would have mourned my brother too. From what he told me, their language was strange and he couldn’t understand much, because he was dizzy from some painkillers. He was just scared and trying to defend himself, sitting behind the door hiding. There must have been at least two to three people,” he said emotionally.

“In the neighborhood they still accuse me that my brother and I killed my father to take the house. No one asks me how I feel right now. About how my psychology is… My daily life is work, home, cemetery and cemetery, home, work,” he said.

“This is the first Christmas I won’t have my father with me. My mother is in a bad state of mind. My sister too. For us this is not over. We don’t have any news from Rhodes Security, or anything. We are in a black darkness so far. While my father’s killer is walking around outside, we are afraid, we lock ourselves inside the house,” he concluded.

The body of the unfortunate head of the family Giorgos Karyotis was found inside the house by his youngest son, Vangelis. The victim’s hands were shackled with cords from his ankles, while he wore a noose around his neck with a thick rope. A little earlier, they had closed his airways with a towel, so that he would not scream and be heard.

The investigations of the Authorities, which continue at an intensive rate, seem to focus on his familiar environment.