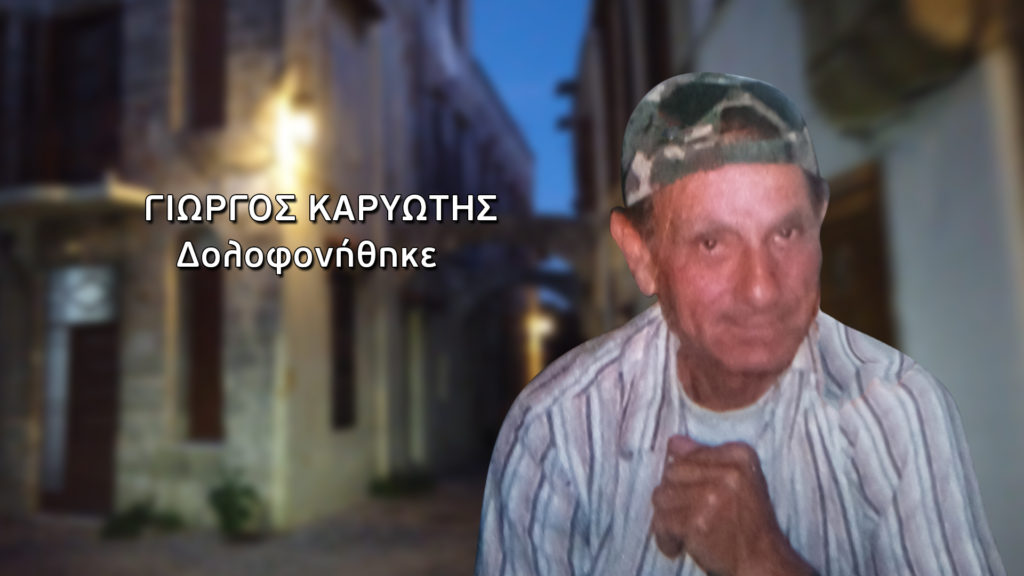 The "Tunnel" turned on its lights on the evening of Friday, October 21, live from the Medieval city of Rhodes, in an attempt to shed light on the tough crime, with victim the father of a family.
Share

The children of Giorgos Karyotis, together with the reporter of the show, Nikos Kontorousis, were found outside the house on Irini St., where he was found murdered at noon on Tuesday, June 14.

The new elements of the case were presented and some dark points were illuminated by the relatives themselves.

The victim’s son, Vangelis Karyotis, was the man who found him murdered.

He, along with his father’s friend and neighbor, Makis Petridenas, talked about what they saw when they first entered the scene of the crime.

Angeliki Nikolouli asked them if they saw marks on the victim’s wrists and neck from the laces he was tied with, and from the rope that was passed three times around his neck.

The picture they gave did not indicate strangulation by the rope and the journalist wondered if the whole scene was staged so as not to show the real cause of death of the unfortunate dockworker.

It seems that they blocked his airways with a towel that was thrown next to him, so that he wouldn’t shout and the neighbors would notice him.

In the course of the show, it was mentioned that the person who was witnessed outside Karyotis’ house in the early hours of the morning, was probably a passing tourist and not his killer.

His son, Vangelis, spoke about the problem created with the security cameras at the controlled gates of the Old City.

“I passed normally with my motorcycle through the gate of Ai Giannis, on Monday, June 13, one day before I found my father murdered. The cops say no cameras caught me. What can I say…”, he wondered.

“We handed over the footage from the cameras to the police…”

Stefanos Drakos, Deputy Mayor of Rhodes, spoke to “Tunnel” about the unprecedented crime that shocked the closed society on the island of the Knights.

“It is a shocking news, not only for the Medieval city, but also for Rhodes in general, because we are talking about a place that does not present crime. But especially inside the Medieval city, where the definition of the old neighborhood still exists, crime is zero. There, the residents sleep with the doors open, because there is neighbor-to-neighbor trust,” said Mr. Drakos.

Speaking about the controlled entry into the Medieval city and in the event that the cameras have recorded the perpetrator(s), he emphasized:

“We implemented a new system with special technology with artificial intelligence cameras, which read the number plates of the vehicles and thus allow access to vehicles mainly of permanent residents. The data due to GDPR is not transmitted anywhere. In exceptional cases such as this one, they can be given to the Authorities, as was done, after we were asked for our assistance and we cooperated from the very beginning. Apart from the seven controlled gates which are for vehicles, there are many more for pedestrians and there is no control there,” he concluded.

Vangelis Karyotis had spoken to “Tunel” about a person who used to hang out with his father and shortly before his murder, they had argued.

The show located the witness and broadcast the conversation the journalist had with him.

Witness: I don’t know anyone named George, not even about the murder…

“I don’t know the one you’re talking about. This is the first time I have heard of the murder from you. I don’t know him, I am telling you. Do you have any photos of him to show me?”, he asked the reporter in the telephone conversation they had and they made an appointment to talk in person.

The reporter showed him a recent photo of the victim.

“Witnesses we’ve found tell us you were hanging out. That you were at a coffee place together…”

“Did they tell you about me? It’s not true. They are probably telling you about someone else…”, he persisted in their conversation.

“They told me about you, not about anyone else. They say that recently, a few months before his murder, you had a fight,” said the journalist and the witness concluded:

“No no. Look elsewhere.”