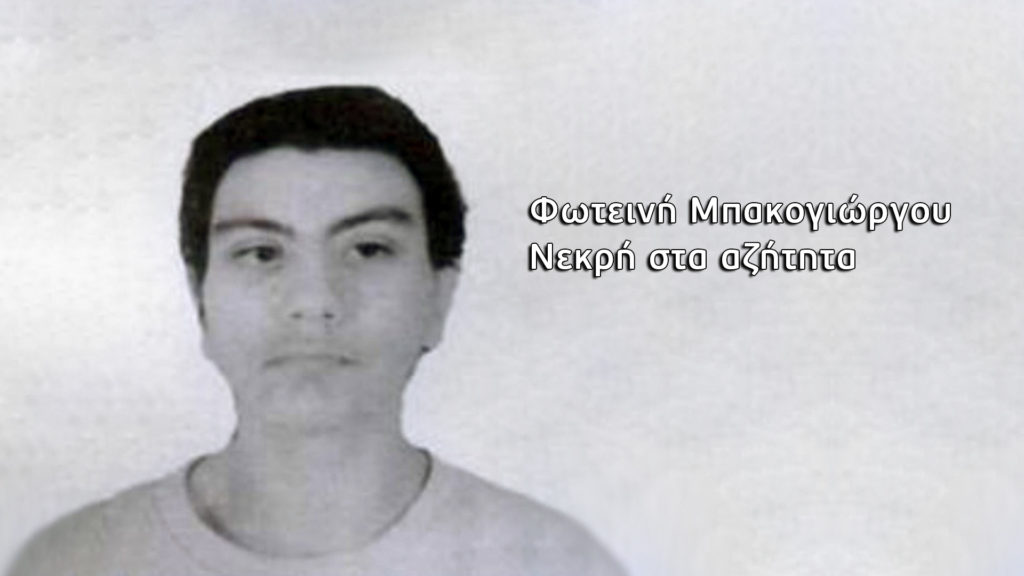 Another missing person found dead in the unwanted.
Share

The unfortunate Fotini Bakogiorgou, 23 years old, mother of three minor children, was for a whole month in the same refrigerator of the “ELPIS” hospital, who had also forgotten the mechanical engineer from Ilia. Eventually she was buried with a cold number, as stranger at the unwanted.

The young mother was found dead on the morning of the day her traces disappeared, on Friday, October 8, on Tychis Street in Patissia, a short distance from her house.

A resident of the area found her wrapped in a blanket and called an EKAB ambulance, which transported her to the hospital. There she remained unclaimed in the refrigerators for a month, after the two police stations, Kypseli where the disappearance was declared and Ag. Panteleimon, who undertook the preliminary investigation to find the body, could not communicate with each other!

The “Tunnel” from the first moment it heard the news, brought upside down to find an end to this new tragedy. The shock was strong when Angeliki Nikolouli was informed that the unfortunate mother had already been buried as unknown at the Zografou cemetery.

Fotini’s mother, in the disappearance statement she submitted, stated that she was six months pregnant. However, it seems that the girl lost the child she was pregnant with, probably due to the abuse she was receiving, as reported on the show.

The allegations of abuse and exploitation of the unfortunate Fotini came one after the other.

“She was stepping on my pregnant mother’s belly…”

A woman who had met the unfortunate mother begging on a notorious street in the center of Athens, said that Faye, as she was called, wanted to escape from what she was going through in the apartment where she was staying.

“She was trapped. She always had a woman behind her to control her. I have been told of a shocking incident revealed by one of her children. They stepped on her belly while she was pregnant to have a miscarriage!” She said.

The manager of the apartment building was informed by the “Tunnel” of the tragic development. She could not believe it, as she hoped she would be alive.

“They had cut her hair and her face was beaten…”

A neighbor who contacted the show described in detail some incidents, indicative of the abuse she received.

“On September 17, the Police and the Fire Brigade came because one of her children was about to hang on the balcony and fall down. Her three children were eventually removed from the house on a prosecutor’s order. After about three days I saw her. They had cut her hair and her face was beaten. She was very battered. She could not speak. I asked her how she was doing and she just shook her head. Her eyes were swollen from the punches. What can I tell you, my soul felt sorry for her. I have not seen her since.”

Testimonies on the show speak of the abuse and exploitation of another older woman, who is not alive.

“This woman, who also hosted Fotini, used to have another older woman under her” protection “at home. She pushed her into begging and urging her to fall in front of vehicles with the risk of injury. Their purpose is to extract money from drivers”, said a resident of the area.

“I had seen Fotini several times on the street being hit in the face or with a broken arm. When I asked her, she told me that she had fallen or that she had slipped down the stairs. A woman was watching her begging and she was scared. She was living with her in the same house. About a month before she disappeared, she tried to tell me something, but this woman shouted at her “continue walking and don’t talk”. The last three years have been almost continuous in this situation. The problem is that everyone in the neighborhood knew and did not speak,” she said.

The woman who hosted the unfortunate Fotini and her family, appeared once as a legal assistant, the other time as a certain commissioner for the living conditions of the family, and even as a relative of Fotini’s sister.

Speaking to “Tunnel”, she responded to what is being said. She claimed that she gathered from the street the “impoverished family of Fotini offering shelter and food. All that is heard is malignancy of persons with whom I am confronted. I will continue to support Fotini’s mother. ”

On the occasion of the International Day for the Elimination of Violence against Women on November 25, the Ministry of Civil Protection posted on social media a video with testimonies of women who have been victims of domestic violence.

Watch the following shocking video entitled “Behind Closed Doors”. Because everyone deserves to smile every day and no one should live in fear.