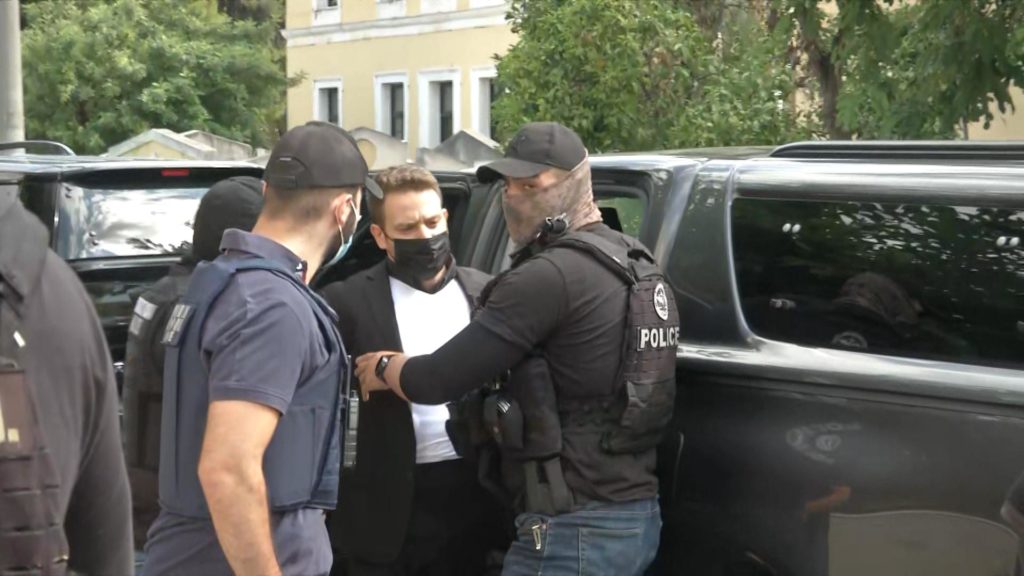 The "Tunnel" turned back on its lights, after the stormy developments in the crime in Glyka Nera, with the victim being 20-year-old Caroline.
Share

The whole background of this much-praised case and the conversations of the confessed murderer with Angeliki Nikolouli last month, came to light and stuck the viewers.

The journalist kept in direct contact with the pilot all these thirty-seven days from the murder until his confession. Apparently he was afraid of being exposed and avoided meeting Angeliki, who persistently asked him to talk in person about Caroline and what happened in the maisonette where they lived with their little girl.

His satanic plan to direct the robbery after the murder seems to have been copied from the attack on the house of his colleague and trainer in Megara. The “Tunnel” first brought to light the identical robbery and he hurried to support it, talking about the same gang.

The hypocritical recital and the theater continued until the truth was revealed about what really happened that fateful night on Tuesday, May 11th.

The murder, which froze public opinion and was all over the international news agencies, was solved on the day of the memorial of the unfortunate mother.

A team from the Crimes Against Life department rushed to Alonissos, where the memorial service was being held for the forty days since Caroline’s murder. When Babis saw the police, he realized that his plan had failed and now it was all over.

Security officers managed to extract his confession a few hours later, with the information they collected and presented to him.

The show had received information about what Caroline herself had confessed to her friendly environment. She seemed to be having a hard time lately and thinking about separation. Their quarrels were frequent and implied that a third person had entered between them.

The phone call made during the live show, confirmed the suspicions… The person who spoke with Angeliki, gave in detail what was happening lately that had hurt the unfortunate girl…

What made impression, is the post that Caroline had made on Facebook years ago about her great love, which was reaching the clouds. Specifically, she wrote:

“You are the only flower I would cut and let my whole hand be in blood by the thorns.” 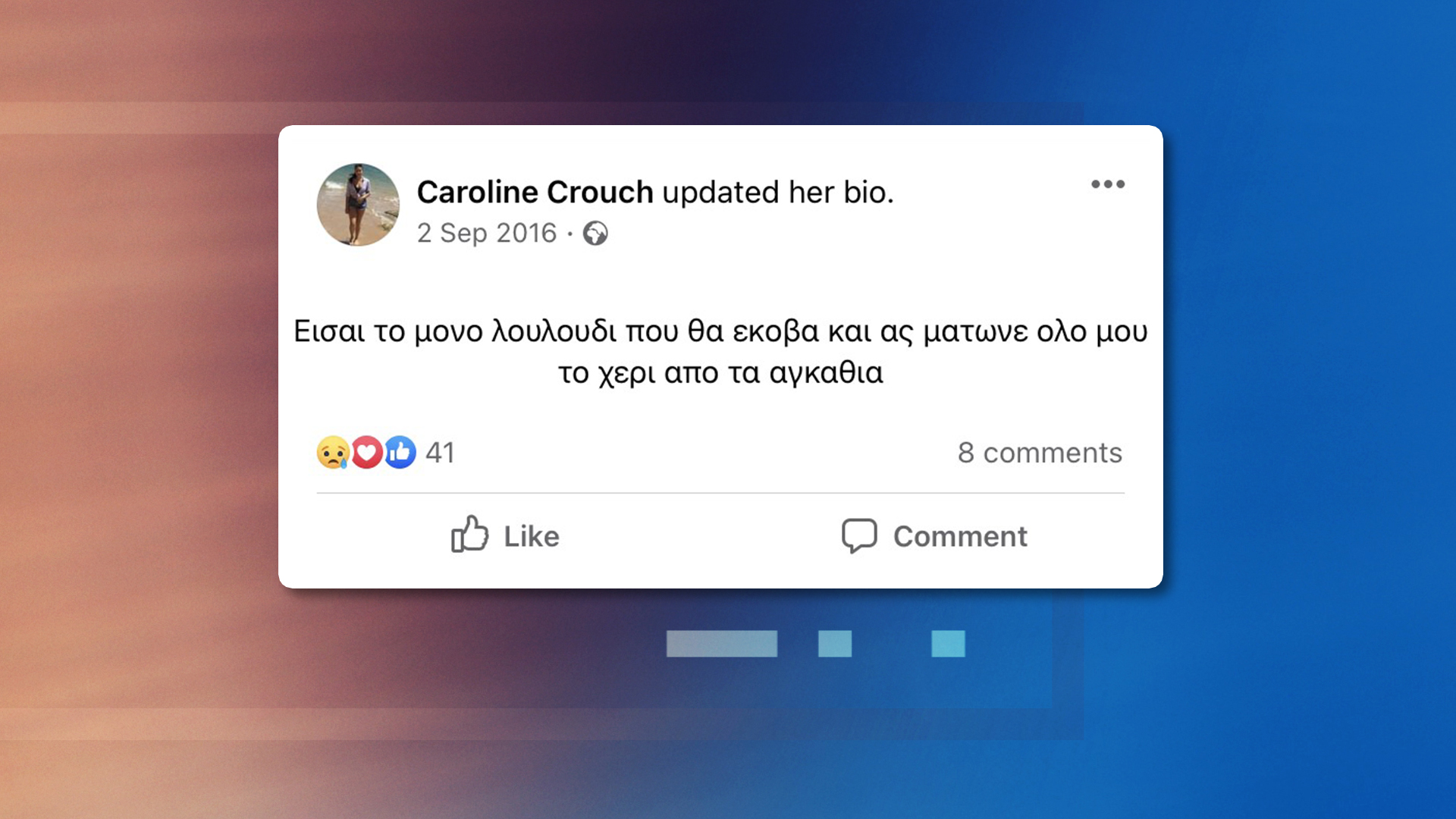 The pilot’s conversations with Angeliki Nikolouli…

The revealing conversations that the pilot had with Angeliki Nikolouli during the last month in the much-praised case of the murder of his wife come to light.

He played the role of the victim in a well-made role. He tried in every way to blur the waters and to disorient the investigations. Among other things, he mentioned to Angeliki Nikolouli:

“At this stage of the investigations, I have been asked not to publish specific information, because misinterpretation by the public can make the process difficult or delay, something that none of us wants, even on a credible show like yours. I am still in a bad situation, Mrs. Nikolouli, to talk about my wife. It hurts me. I know you want to help as you always do, I hope we can talk soon. I am every day with the Police who are very much investigating. And I have shown them confidence.”

When Angeliki insisted on meeting him, he constantly found excuses. Even the day they had arranged to meet in person.

“I believe that all my work with the Police will last until early in the afternoon, not later.”

At the heraing of the camera, which Angeliki would have with her, he was confused, panicked and tried in every way to avoid the meeting, but without being targeted.

“It is still too early for a camera. I’m not at a good state to talk. Even if I grit my teeth, it will not help at this stage. Know that there is no plan to speak in another medium. When I am a little better, you will be the first to know,” he said.

What made impression, was the abrupt change in behavior when something happened that he could not control. The politeness was going away and another image was taking its place. He spoke in the singular and demanded immediate answers abruptly.

“I was just told that a priest called on the show and said that my wife had gone to confess and told him about alleged problems between us. If the one who received it, is indeed a priest, which is unlikely, then his false testimony is of pure evil that does not fit a clergyman and he will be held accountable. I want a name, a phone number and a parish. Apart from the prosecutor’s office, all the information will go to the archdiocese. He can pick up the phone to call me. Because I am a good person, I will give him a chance to apologize before seeing his name in a case file. Let someone inform him that in addition to sin, it is also illegal for someone to testify falsely… ”

“Such a planning to set the scene?”

After the confession of the pilot who shocked the public, the trainer and his friend talk to “Tunnel” about their acquaintance and the possibility that the husband of 20-year-old Caroline was “inspired” by the robbery, which he and his wife fell victim .

As the “Tunnel” had revealed, in 2018, Caroline’s husband’s trainer and his wife fell victim to three ruthless thugs inside their home. The robbery was “carbon” with the one described by the pilot at his home. After the confession of the perpetrator, the question arises as to whether he copied the savage incident experienced by his instructor.

“He knew the story,” says the instructor, adding:

“Such a planning to set the scene? I don’t know what to say!”

In recent years he only saw him for coffee, but everyone in the company had him as their child.

“The company closed to take him to the funeral. And the company took him to the memorial again”, he concluded.

“He was driving and fell abstractly in my granddaughter’s car…”

According to a neighbor of the couple, who spoke to “Tunnel”, the confessed perpetrator about a month before the murder crashed his granddaughter’s car because he was distracted while talking on his cell phone.

Another witness and neighbor of the unfortunate Caroline and her husband, speaking on the show’s camera, said that the morning the crime was revealed and while the police had cordoned off the area, he was sitting on the sidewalk crying while holding his baby.