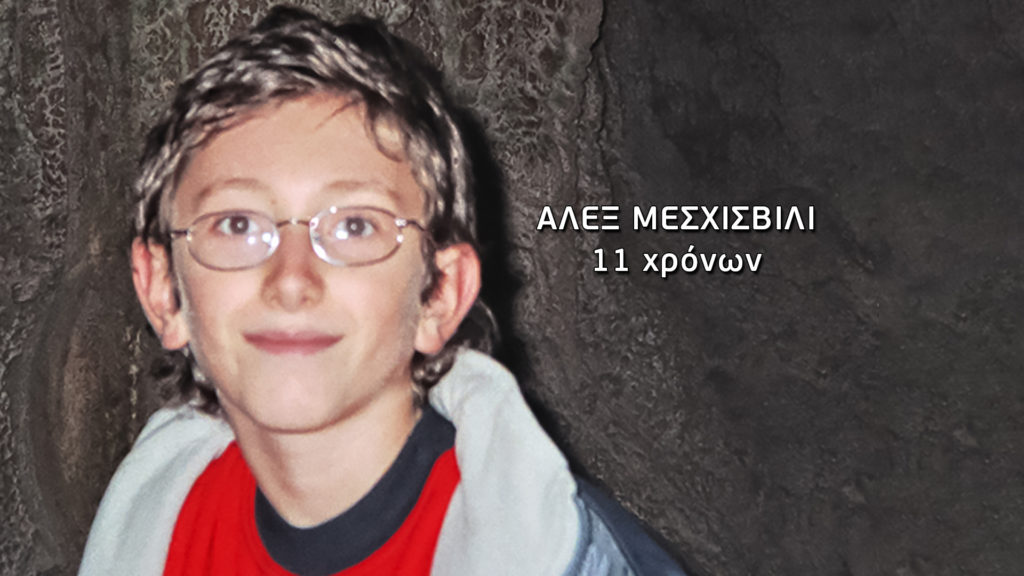 On the evening of Friday, December 9, "Tunnel" wrote the next page, which seems to determine the thriller of the student from Veria, which shocked the whole of Greece.
Share

Sixteen years after the murder of 11-year-old Alex, the new evidence that comes to light unites the scattered pieces of the puzzle, leading the authorities to a new round of investigations to locate the body of the unfortunate child, who was the victim of fierce bullying by his classmates in Veria.

It was February 3, 2006, when he received the fatal blows of the five toughs of the “unripe” gang. He was taken to an abandoned house near the town hall and died helpless. Two days later they put him in a supermarket cart and took him to Barbuta.

Some adults from their environment took care of disposing of his body in the nearby area. This is now said to be the old Jewish quarter around Tripotamos. That’s where the new testimonies lead to the child’s mother, but also to the show.

It is proven by the “Tunnel” investigation, that some people who appeared as workers of the Municipality, as reported by the witness, wearing the characteristic yellow vests, dug in those days of snow in the area and disappeared Alex. A similar testimony was given years ago on the show. The witness saw cement being poured in the same area.

Security men, as well as scientists with new methods, are now entering the battle of investigations. Important is what the Professor of Applied Geophysics of AUTH, Mr. Grigoris Tsokas, who had helped solve the murder of Dimitris Graikos in Thessaloniki, when his laboratory found him buried in his car, told “Tunnel”.

Testimonies into the night…

The show was again in Veria for on-site research in the old Jewish quarter and spoke with officials of the Municipality, with contractors, but also with residents of the area.

During the live broadcast, important testimonies came in, both about the burial site and about a person he knows who has not spoken to this day. Angeliki Nikolouli spotted this person and spoke with her.

A resident of Barbuta reported to “Tunnel” what happened in the summer in the area.

“Last summer I saw two security personnel in civilian clothes in the square and I learned that they came to investigate Alex. Now in which houses they asked, etc., I do not know. They were moving for surveys towards the river, but also from the underside of the old buildings. What I saw in the summer, this is what I am conveying to you. I don’t even know if they found anything or if they were able to get to the back side of the river. Only the Security knows this,” concluded the witness.

“They may have been digging illegally here…”

Savvas Theodoridis, engineer of the Municipality of Veria, talking to the journalist of the show, mentioned the old buildings of the area.

“The renovation of the Jewish synagogue and the surrounding area had taken place and the keys were held by someone in charge of the Municipality of Veria. The adjacent building, I think, was renovated a little later”, emphasized Mr. Theodoridis, while also expressing his confidence that the witness who was prevented from passing by a certain point by “workers” in yellow vests, is not talking about employees of the Municipality.

“They were private individuals doing some private work, illegal or not. This is what I understand”, he emphasized.

The tour guide of the Jewish quarter of Barboutas, Maria Psychari, also spoke at the “Tunnel”. He mentioned that during Alex’s time, the area had a completely different image, desolate and abandoned.

A resident of the area spoke of many dark spots, as at that time there was no lighting outside.

New scientific methods of AUTH in the battle of research…

The Professor – Director of the Applied Geophysics Laboratory of AUTH, Grigoris Tsokas, spoke to the “Tunnel” camera about the new scientific methods that are applied to similar research cases.

“Usually what is detected is the digging, that is, the digging to make the grave. The geophysical conditions in the subsurface must be specific to be able to make this detection. The sixteen years that have passed in this case are not a problem. The bones are not detected at all. If we’re going to go, we’re going to do indirect detection, through the excavation. It will certainly help the fact of the burial, if it has been done at a shallow depth”, he said characteristically.

The professor showed the broadcast camera the method by which they locate graves through the changes in the subsoil.

“My laboratory has developed some methods and today we have a program with the General Staff of the National Defense to locate graves of the fallen in the Greek-Albanian war, where we are doing very well. Several graves of our heroes have been discovered,” the professor concluded.

“When I testified about the kids and the stroller, they didn’t believe me…”

The “Tunnel” spoke to an important witness, who had testified to the authorities about the shocking things he saw taking place in front of him. His testimony comes to “bind” with what the children had initially confessed to the police and had also revealed on the show.

“The children then made it difficult for me, because I was coming down with a van and the road was covered with snow. And I say what are they doing now, they will come out in front of me, because the sidewalk ended at that point. I thought “how am I going to stop the truck? What do the old boys do?” The four were holding the cart and the youngest was running ahead of them. From what I saw, it looked like a leg was sticking out. “Oh,” I say, “nice game they chose, if he leaves them in the cart, there will be nothing left.” The cart was not construction as they said. It was one of those old supermarket cars, damaged and tied to the wheels with boards,” he said.

The infuriating thing about the whole case is that at first his testimony was passed over… by the authorities.

“They were coming down from the house of the Vlachs, as it is called. It is from above the square, where the plane tree is. Just after the turn I overtook the children. In other words, on the way to Barbuta, there is a paved path that goes down and enters the river,” added the witness.

Savvas Theodoridis is the oldest engineer of the Municipality of Veria and has held the same position since the time of the disappearance and murder of the young student. Speaking to the Tunnel camera, he also referred to the workers’ yellow vests and how easy it was to get them.

“Work by the Municipality had then stopped in the area. The cold weather at that time was prohibitive for any technical work that includes cement, asphalt, etc., as there was total frost, we are not discussing it,” said Mr. Theodoridis.

Regarding the yellow vests worn by some on the day in question, he said:

“We use these vests when we do work. But anyone can find these in the trade for two or three euros. At that time we employed two to three hundred workers in one season and provided them with personal protective equipment. Everyone could take them home, give them to a friend…”

He did not rule out the possibility that the men the witness saw were the workers.